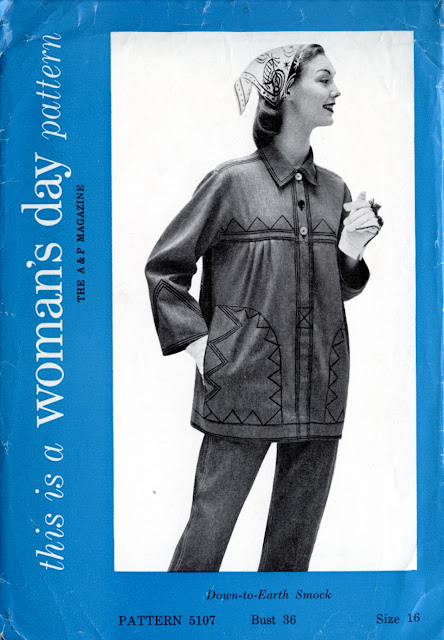 On its own, the "Down-to-Earth" smock appears to be a nice utilitarian design enlivened with some easy machine embroidery.  But in this case we have additional documentary evidence to provide some context.

Tucked into the envelope was the page from Woman's Day magazine featuring this pattern. 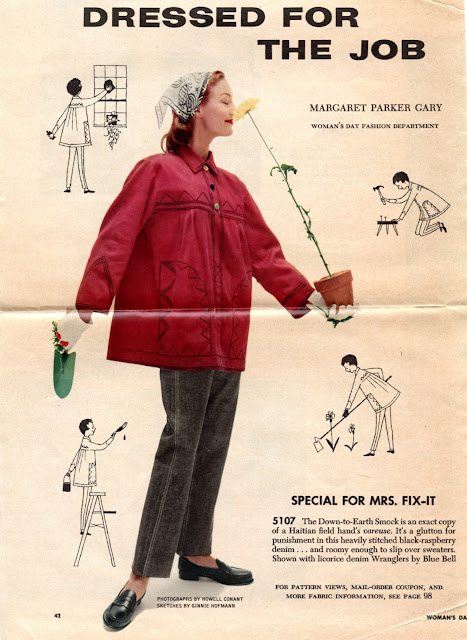 Suddenly, we have a sense of materials, color use, wardrobe decisions, and an insight into the designer's vision.

"Black-raspberry" denim is much more interesting that the mid-gray of the black and white pattern envelope, and it's interesting to see the smock worn with "licorice" denim Wranglers (note the white top-stitching) and what are assuredly, the late (and much lamented, at least by me) Bass Weejuns.

Margaret Parker Gary writes that the smock is an "exact copy" of a Haitian field hand's vareuse.  Well, maybe.  I've been unable to find compelling visual evidence of an embroidered Haitian vareuse, although I've come across several text references to the vareuse in a general sense.  In his book Haiti, Her History and Her Detractors, published in 1907, Jacques Nicolas Leger describes the Haitian peasant: "On week days his costume consists of a "vareuse" and trousers made of blue denim..." and a footnote describes the vareuse as "a kind of loose jacket with two pockets in front. "  The web site for Haitian Enfance Education reports that for a recent celebration of Agriculture and Labor, parents were asked to dress their sons in the traditional vareuse.  The accompanying photographs don't provide enough detail to distinguish the vareuse.

The term vareuse is used today in France for the "traditional" Breton fisherman's smock.  (See the armorlux web site for an example.) (1)  Less frequently the term is used to describe a military garment somewhat similar to a sailor's middy blouse.

It is the French version of the fisherman's vareuse that Dior adapted for his 1957 "Free Line" collection, according to Daniel Delis Hill, in his book As Seen in Vogue, A Century of American Fashion in Advertising.  If this date is correct we have an interesting example of near simultaneous design, with both Gary (in the New World) and Dior (in the Old World) apparently picking up on the vibe of the larger aesthetic of the folk revival of the era.

Margaret Parker Gary started designing for Woman's Day around 1947-48.  In a 1952 newspaper interview about her work with Woman's Day, Gary states that "You don't have to be rich to be well-dressed."  Gary worked for Lord and Taylor for a number of years before making a big shift in demographics and joining Woman's Day.

While the Down-to-Earth smock is a relatively simple garment, it will take some time to make.   In addition to the machine embroidery and lots of top-stitching, tiny tucks fit both the front and the back into yokes, and the sleeves have rather tricky applied facings.

The photographer, Howell Conant, was a well-known fashion photographer of the day, shooting such icons as Audrey Hepburn and Grace Kelly.

This unprinted patterns does not appear to have been used.

Don't you think this design is "suitable for maternity"?

Kat - Yes, I thought of that. The photos from the magazine especially make the smock look like maternity wear.

A fascinating bit of mid '50's fashion! My undying thanks, though, is for the link to the Norfolk slops site -- I've been rewatching the "Two Fat Ladies" series, and the late great Jennifer Patterson wears a Norfolk slop quite frequently! I am very much wanting a Slop myself now.

Miss Allen - I've been looking for a pattern for a Norfolk slop for years. I may just have to experiment with drafting one up on my own.

So wonderful to see a post by you again! I was fascinated by the very casual style for housework, at a time when many women were still wearing house dresses. And those pants really look like jeans.

I love your blog and especially this pattern - there's something Nordic about it I think and the three-coloured buttons are great. I also love the Norfolk slop! But when I first read that, I thought it said Norfolk shop , which made me think of this shop in Norfolk (UK) you might like: http://www.old-town.co.uk/.
Would love it if you'd check out my blog, too: http://gladucouldmakeit.blogspot.co.uk/

Hello Ms Cake Thanks for the kind words on the blog. I'm an enormous fan of Old Town - I have a browser tab open to the Bungalow apron even as I write this. Thanks for stopping by!