ITALY In representing Italy a composite Dress taken from the peasantry garb has been designed in the colors of the Italian national emblem. A pleasing satisfaction can be derived from the attractiveness of this Costume, for it is typical of brilliant colors, regardless of harmony, and an abundant display of jewelry.

The illustration is obviously in black and white, so I assume that references to colors (and the designers' opinion that the Italian national colors lack harmony) refer to a color illustration that appeared either in a Ladies' Home Journal Magazine or pattern catalog.  The designers get honesty brownie points for admitting that they've designed a composite of peasant dress.  I like the instruction for "an abundant display of jewelry."

And earlier maker made some pencil notations on the pattern envelope for the colors of the blouse, bodice, apron, skirt and bodice facing including red, green, and dark blue.  The bodice was also cut a bit lower, with the cut-off piece carefully folded into the envelope.

I believe that the young lady in our illustration may be reading her dance card, a clue that this type of costume could be worn to fancy dress balls.

Here is my grandmother in another interpretation of "traditional" Italian folk garb from about the same time that this pattern was published. 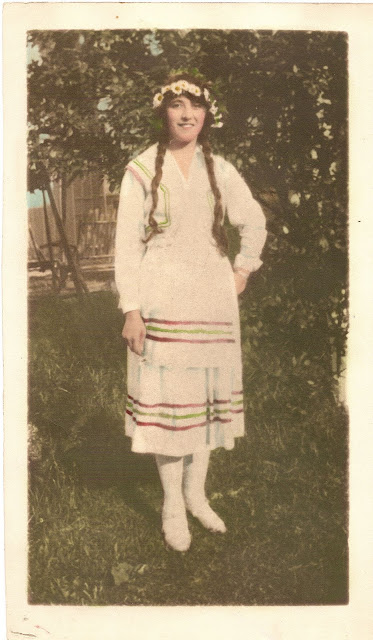 While we "read" the red, green, and white in my grandmother's costume as typically representing Italy, the Italian tri-color flag with which we're now familiar wasn't formally adopted until 1948, though there were many variants of these colors in earlier Italian flags. 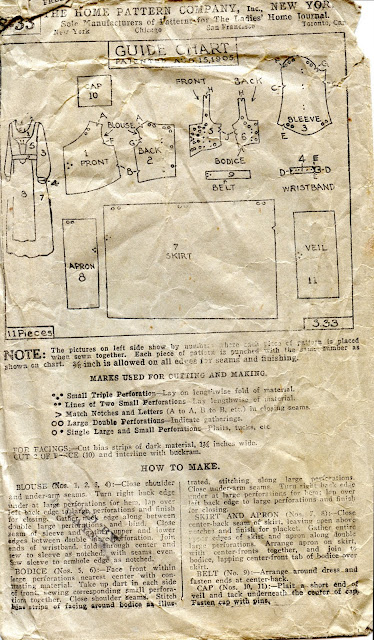 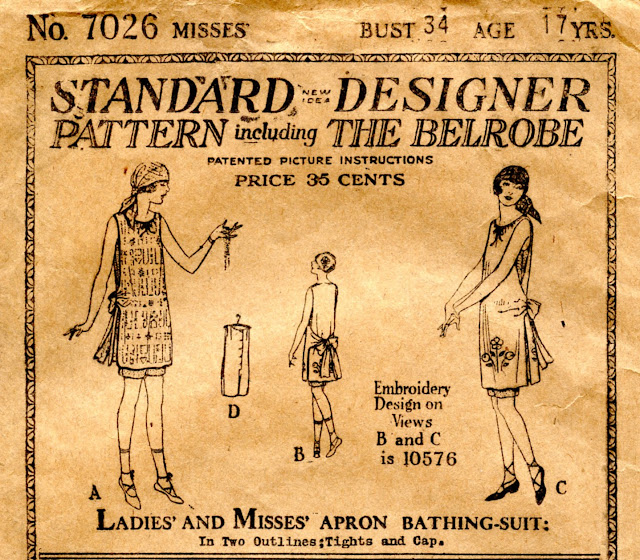 Here's a nice photo from Shorpy from 1920 showing what was probably a purchased bathing suit made of knitted fabrics.  By now we've definitely abandoned the earlier dress-and-bloomers style that we saw in May Manton 7853 but some sort of skirt is still thought necessary.

For this pattern the designers recommends Jersey for the "tights," as they're are calling the undergarment.  At this time Jersey would have been a fairly sturdy knitted fabric of wool.  Recommendations for the "apron" include taffeta, shantung, satin, printed crepe and crepe de chine.

The print on view A looks very much like Egyptian hieroglyphics to me. 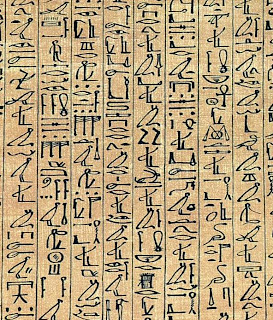 As it happens, King Tut's tomb had been discovered by Howard Carter in 1922, and worldwide Egyptomania promptly ensued. 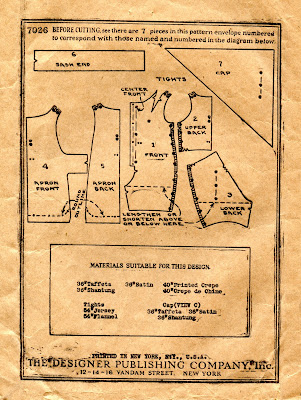 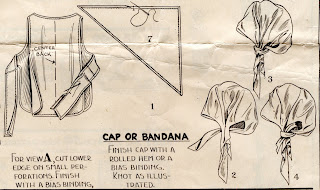 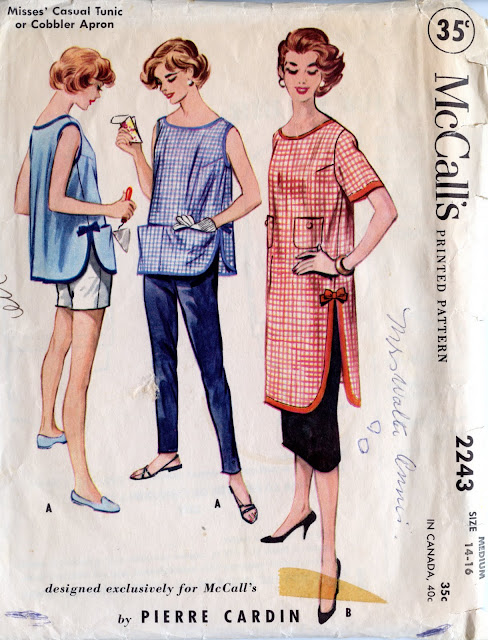 By the 1950s cobbler aprons were very popular.  With its bust darts, curved sides, and pocket detailing, Cardin's interpretation for McCall's is a little tonier than the completely unstructured tabard-style aprons offered by most pattern companies at this time.

Pierre Cardin was trained as a tailor and worked at Paquin, Schiaparelli, and Dior before setting out on his own and showing his first couture collection in 1953.  He would release his first ready-to-wear collection in 1959, but in 1958 he enters American popular culture with a series of patterns for McCall.  The elegant little suits and cocktail dresses one understands, but the thinking behind the apron and "casual tunic" is a bit mysterious; can you imagine a Calvin Klein apron pattern, for example - or better yet - Karl Lagerfeld?

But compare the tunic to Cardin's "Cosmos" dress from 1967.  The evolution is very clear. 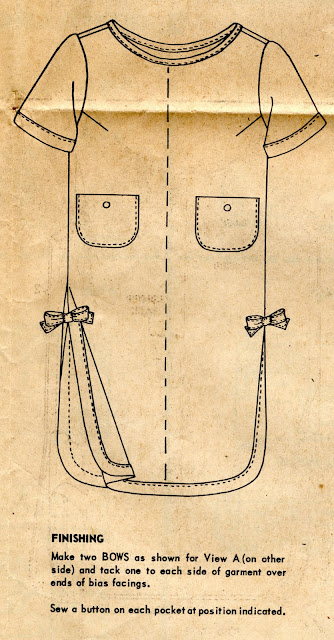 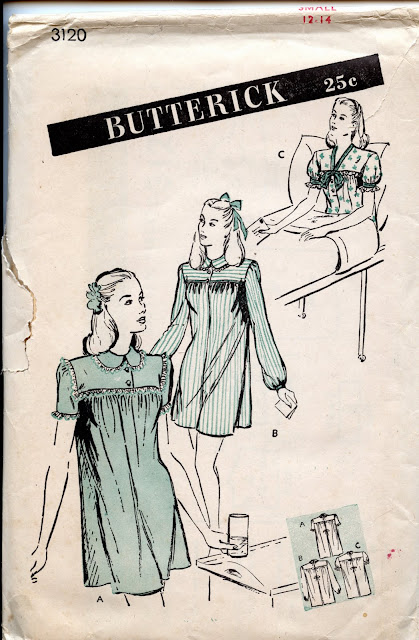 Patterns for hospital wear still up now and again in the backs of the big pattern catalogs, but they don't stay in print very long and can be hard to find.  Really, this is just a nightgown pattern cut off short and modified to tie in the back, but wouldn't it be comforting to go into the hospital supplied with gowns that somebody who cared about you had made?  And wouldn't it also provide some measure of comfort and purpose to the maker to have done something so useful? 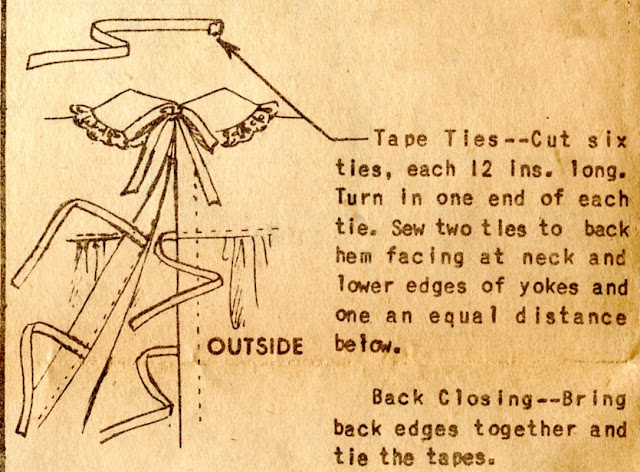