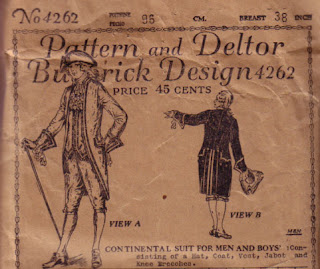 About 1926, because that is when the Unites States celebrated its 150th birthday.  Continental in this case refers to the Continental Congress, which governed the United States during the revolutionary war.

However, I've collected a fair number of these eighteenth century costume patterns (and will eventually profile some of them here), and not all of them revolved around significant anniversaries.  There is a wonderful photograph reproduced in What Clothes Reveal of "'costumed participants in Colonial Pageant...July 4 1921'" showing dozens of residents of Williamsburg Virginia dressed in pseudo eighteenth century clothing, with some of the men's suits looking very much like the illustration for this pattern.  It would be interesting to study the numbers of July 4th parades over time.  Even little towns can scare up George and Martha Washington on a float built around a hay wagon or a pick up truck.

This pattern is unprinted.  The instruction sheet, the Deltor, states that "If suit is to be worn once, seams need not be finished.  If desired, it may be well made, so it may be worn on more occasions."  Detailed instructions are given for sewing on braid and lace.

Here's the back of the envelope.  Note that one may even make the tricorn hat: 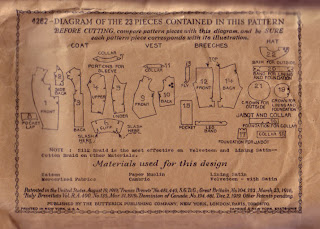 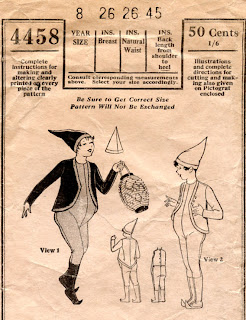 The latest patent date on the envelope is 1925. Remember that patent dates on patterns frequently refer to the pattern layout illustrations or construction guides, not the styles themselves.  There is a wonderful article about this topic here.

Costume, masquerade, and fancy dress are all terms used to describe this type of pattern.  The description for this one reads:

BOYS' MASQUERADE COSTUME.  This Brownie costume consists of a suit, short open-in-front jacket, and pointed hat.  The suit is sleeveless and closes at back.  Bands finish the edges of the jacket which has long one-piece sleeves.

Palmer Cox is the father of the Brownie figure as we now know it.  The first book of Brownies stories, The Brownies, Their Book, was published in 1887.  Cox followed this up with 15 more books about the Brownies.   Cox died in July 1924 and in an obituary in the Carbondale (Illinois) Daily Free Press, among his works is listed The Brownies in Fairyland, a "cantata for children."  Cox was a Mason and the Grand Lodge of British Columbia and Yukon provides some very nice information on Cox, and where the publication date of The Brownies in Fairy Land (with music and Lyrics by Malcolm Douglas) is listed as 1925. 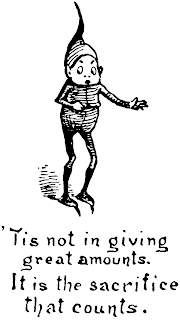 One can imagine The Brownies in Fairyland being performed at school and summer camp pageants, so it's quite possible that Pictorial Review saw this pattern as an opportunity to cash in on the need to dress dozens of squirmy children in Brownie suits.

This is another one of Pictorial Review's wonderful printed patterns.  The tissue instruction sheet recommends stuffing a pillow in the front of the suit and tissue paper into the toes of the boots.  Now and again a sewing pattern presents a little archaeological evidence.  In this case, an extra or unused facing was tucked in among the pattern pieces. 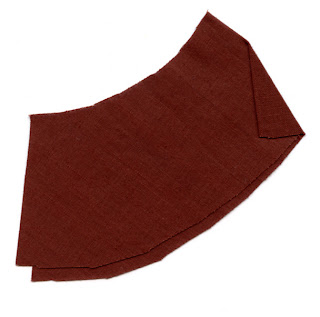 The price for this pattern is 50 cents, which strikes me as a bit stiff for the period. 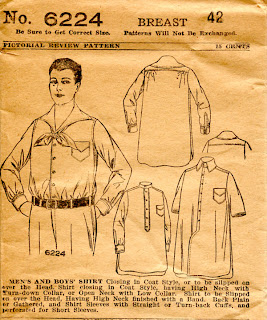 Mid 1920's.  Pictorial Review patterns often have very good descriptions printed on the envelopes, though the capitalization makes me cross-eyed:

It's interesting that the featured illustration is for the casual, low-necked version, which I think is quite dashing.  The soft tie is probably a rolled black silk square, widely worn at this time with middy blouses.  The look brings to mind Douglas Fairbanks, though without our model's slightly dumpy physique.  If the dropped waistline of this period was hard on women, it was absolutely style death for men.

Note that men's shirts at this time are making a transition from pull-over to button front, or as it's called here "coat closing."  This pattern attempts to cover all the bases, providing pull-over and coat closing styles, long and short sleeves, two different attached collars, and a band collar to which a stiff purchased collar could be buttoned.

This pattern is unprinted.  The construction instructions, which are reasonably detailed, are printed on the back of the envelope. 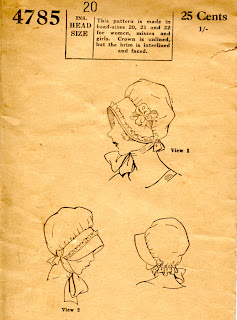 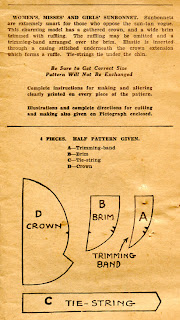 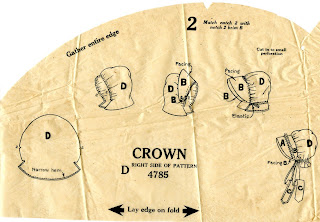 The important feature to note here is the cross-over front.  If the company was working through their pattern numbers in roughly sequential order, this one would be about 1915.    I've recently acquired a four page newspaper insert for May Manton patterns dated July 1916 and the pattern numbers are in the very low 9000s.

Notice how similar this pattern is to the uniform being worn by these women. (You'll need to blow up the image a bit to see the cross over fronts, but they are certainly there!)

The same basic cross-over style was used for McCall Pattern 7986, which Past Patterns offers in a blue line copy, and this style will continue to show up into the thirties, when it gets a name of its own. 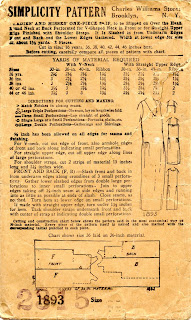 This one is a mystery.  The mystery is not in the garment, a completely unremarkable one piece slip (note the hip gathers so common in the late 1920's) but in the brand.  The Simplicity Pattern Company that we know was founded in 1927 by James J. Shapiro and his father.   The New York Times obituary for Mr. Shapiro gives a good summary of the company and its founding philosophy.

But this Simplicity Pattern was put out by the Charles Williams Stores, a mail order house established in New York City in 1913.  An announcement of their incorporation at the time stated that Charles Williams Stores will "carry practically every line of merchandise, with the exception of automobiles and undertakers' supplies."  Late in 1929 the company was acquired by National Bellas Hess, another mail order house.

How curious.  It's possible that Charles Williams Stores was in financial trouble by 1927 and was only too happy to sell the Simplicity name to Shapiro - or perhaps the line was never a strong seller for the mail order house.  It seems unlikely to me that Shapiro, also doing business in New York City, was unaware of the existing Simplicity pattern line.

Shapiro's timing couldn't have been better, and I'll have more to say about this when I profile some early Simplicity patterns. 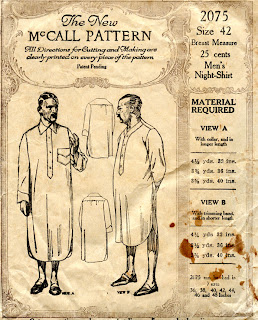 Night shirt patterns are still represented in the pattern books, though generally now as a unisex pattern. They are pretty darned straightforward.  Note that yardage is given for 32", 36" and 42" wide fabric; even 36" wide fabric is hard to come by today.  That's why it's important to show the layout, which helpfully makes provision for piecing the sleeve when working with 36" wide fabric: 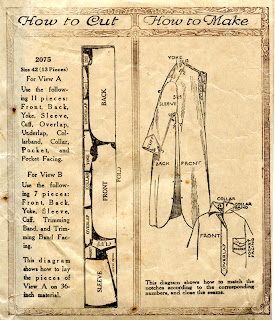 No sewing instructions were printed on the pattern pieces as was generally done with McCall women's patterns of this period.  The pattern has been cut out in View B.  I rather like the look of Mr. B.  I think Mr. A is rehearsing his campaign speech.