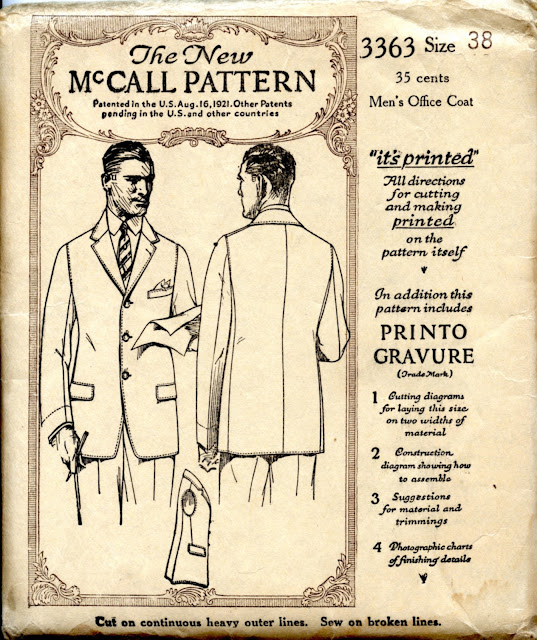 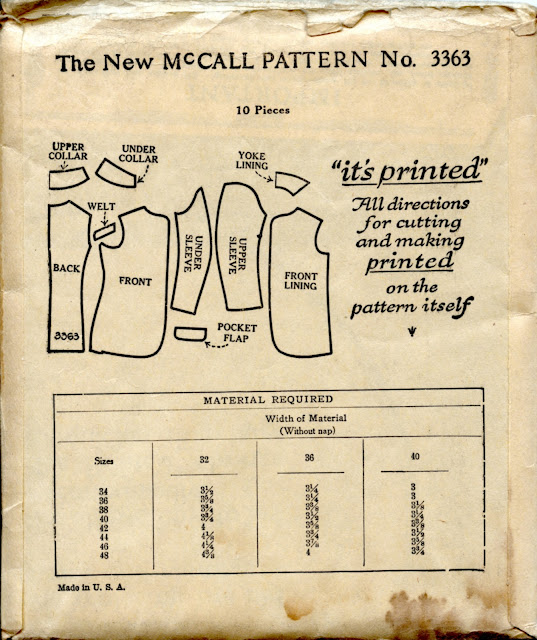 This is a fascinating piece of history. It sounds like in the teens and 20s, the office coat on the street was sort of like a short-sleeved white button-up shirt with tie and slacks--identifiably white collar, but low-status. I'm always interested in early 20th century menswear!

What a lot of background you've provided. I love your observations--once stayed up well past bedtime to read from the very beginning.

Did the office coat go on over the suit coat, or replace it, in the office?

I believe that the office coat replaced the suit coat in the office, but I'm not sure I have the evidence at my fingers tips to prove this. The cut of the pattern looks too slim to be worn over another coat. This makes the office coat a little different from say, a lab coat.

Interesting post! And it's nice to hear your eBay risk paid off. From the numbering and envelope design I would say the pattern is from the earlier Twenties, around 1923/24.

Fascinating detail of the office coat history. Doesn't this pattern look more like a sports coat? I can't imagine wiping a pen on it.

I wonder if those jacket has the same intent as a housedress or apron. In the past people just didn't have as many pieces of clothing as they do today and doing laundry was drudgery. So like apron or housecoats maybe this jacket was worn to keep ones clothing clean in between infrequent washings.

Phyllis - Yes, I think there is an equivalence between the apron and the office coat. Being careful about the costs of dry cleaning is nothing new, particularly if your position is at the lower end of the wage scale. That's why moving beyond needing to wear an office coat seems to have been an important social indicator - you had moved beyond duties that would make your clothing grubby.