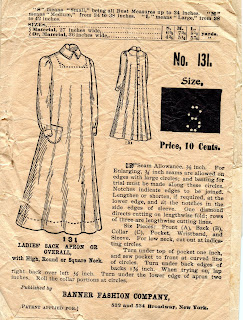 On October 30, 1901, Thompson, Gibson and Company advertised in The Williamsport (Pennsylvania) Daily Gazette and Bulletin about


We have secured the agency of the BANNER FASHION COMPANY'S PATTERNS for the City of Williamsport.  Right here we want to say they are the equal in every way of the BEST PATTERNS on the market, and in some things surpass the so-called best patterns.


We guarantee the absolute correctness of our patterns and, if fabrics are destroyed when following the directions on the label, we stand the loss.  No other house in the world advertises this, nor is there any better way of proving our faith in the construction of these patterns.


The improvements embodied in the Banner Patterns are:


The only guaranteed Patterns.


Constructed regardless of expense


Absolutely the best in Design, Fit, and Style.


On June 14, 1902, the Wayne Dry Goods Company ran a 1/6 page ad in the Fort Wayne (Indiana) News for Banner patterns in which they state:


With the Experience of Years Behind Them Gained in Connection with the Oldest and Most Popular Pattern Maker in the Country the BANNER FASHION COMPANY, Combining thus the benefits which are derived from experience and long practice, with all the additional improvements of recent years, offer their NEW PATTERNS, confident that they are as near perfect as an article of this kind can be made...Up-to-date always satisfactory styles at 10 and 15 cents each.


The popular pattern maker referenced appears to have been Butterick.  Just a few days earlier, on June 8th, 1902, the New York Times reported that Butterick owned not only Banner,  but also Standard Fashion, and New Idea.  (Butterick also acquired both Martha Dean and Little Folks and consolidated them into a single brand.)

There is some evidence that Banner produced one-sheets showing their latest styles.

In  New York in 1907 the printers' union recommended boycotting anybody who sold patterns produced by Butterick and their subsidiaries, including Banner, because they used non-union printers.  The latest reference I've found for Banner is a lawsuit in 1910.

This pattern came to me exactly as you see it, with the label glued directly to the pattern. The Butterick Shawl Case was put up the same way.  I don't know if there was ever any sort of paper or glassine covering.

The term "sack" has a venerable history in clothing, dating to the late 1600's when the french term "sacque" was used to describe a loose-appearing ladies' dress.   For the gentlemen, the sacque suit, or sack suit, was a relatively unstructured suit consisting of a jacket, vest, and trousers that first showed up in the 1850s.   The common element is that both the ladies' and the men's garments hang pretty much straight from the shoulder; there is no waist seam and minimal, if any fitting.  This clearly applies to Banner's apron as well.

This apron is interesting because there is no stated option of leaving off the sleeves; an apron requires sleeves and that's all there is to it.  Also, you're expected to know how to face or bind the round and square neckline options - no instructions are provided for this.

Note that the apron is also referred to as an "Overall." The working garment worn by men is the plural form: overalls.

Wonderful!! I want one!!

The guarantee is impressive; I wonder if they ever had to pay out on it.

I was struck by the guarantee, too. One has visions of pathetic packages showing up at 532 Broadway. I've used some patterns of this period which were extremely well drafted and others that were less so.

I haven't ever made up a Banner pattern, so I can't yet tell whether I'll want to send my own pathetic package to 532 Broadway.