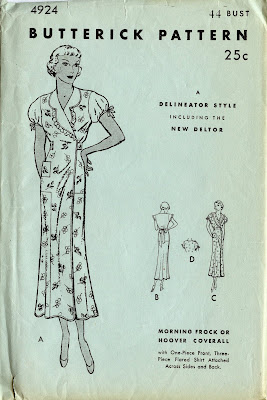 Like the matinee blouse of the previous generation, the designation of "morning frock" tells us that this garment was intended to be worn during the morning; the time of day when housework was typically done. This type of dress was also called a Hooverall or a Hoover apron.

A frequent assumption is that the term Hooverall, if not the garment itself, came into being during the Great Depression, when Herbert Hoover was president.  One man remembers that during the Depression, Hoover aprons were handed out by relief agencies.

But the term Hoover apron, or Hooverall, for a garment that is seen to be the female equivalent of the men's overall or coverall, was known during the First World War.  According to the Business Digest for July-December 1918, in a discussion about applications for trademarks:


The invasion by women of various fields of commerce and industry has brought in its wake a crop of appropriate trademarks.  Conspicuous in the latter class are marks for the working attire for women, recent entries in this class embracing such trade names as "Womanall," "Hooverall," "Farmerette," etc.


But the story may go back a little further.  Starting in 1917 and continuing to about 1920, Herbert Hoover held various U.S. Government positions related to food.  Perhaps a publication from his organization recommended aprons with cross-over fronts.  It's now a very short step to Hoover apron.

The June 21st, 1923 Bridgeport (Connecticut) Telegram ran an ad for Meig's Inc showing a full range of  aprons and apron dresses that were available.  At least from an advertising perspective, these aprons were presented as distinct types with different price points.

(Indian Head, by the way, was a Spring Mills fabric brand name.)

Here's a lovely advertisement for Hoover aprons from the July 21st, 1925 Oakland (California) Tribune.  Notice that one of the selling points is economy - saving on laundering and laundry bills. 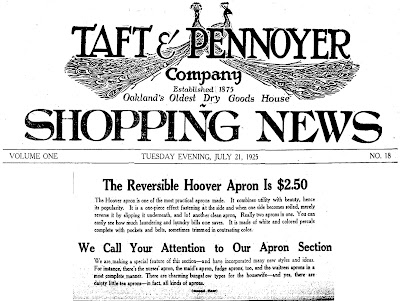 For an idea of the $2.50 apron cost compared to other clothing, in the same advertisement, Taft's offered dresses at sale prices of $8.45 to $24.95 and oxford or strap effect Truwalk brand shoes for $11.50.

The price is a little better in Naugatuck, Connecticut, where on August 15, 1925, the Daily News ran an ad for Howland-Hughes, who were offering "genuine" Hoover apron dresses for $1.79.  This ad is instructive for telling us what colors were available and the variety of occupations for which the Hoover apron dress was suitable. 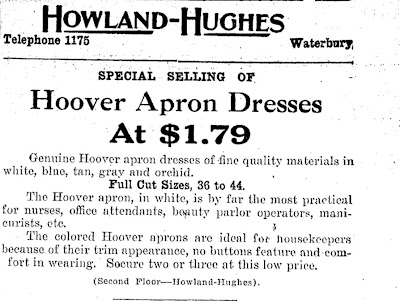 A May 13th, 1929 article in Time magazine credits Hoover's wife, Lou Henry Hoover, with "inventing" the Hoover Apron at the start of WWI. But having seen May Manton Pattern 8904, which I think dates to 1915, the Time magazine story may be good public relations but not very good history.

Here's a wonderful humor piece from the May 26th, 1931 Danville (Virginia) Bee. Given our current economic woes I thought it was worth showing the whole item.  Scoop is referring to the 1928 presidential campaign.  Bearing in mind that Scoop is writing with tongue firmly in cheek, the Hoover apron as presidential campaign tool is pretty funny.  (Also remember that women had only gotten the vote in 1920, so there was still a fair amount of humor to be had from the idea of the ladies voting.)

At the same time, leave it to the French to make a housedress trendy, as reported in the Jun 18th, 1931 Newcastle (Pennsylvania) News.

Interestingly, the last reference I've found to a Hoover dress thus far is in 1950, oddly, also in the context of French fashions, when one could (supposedly) drop $325 at Mainbocher for a Hoover apron (Lowell Massachusetts Sun, December 12, 1950)

I wonder if "Hooverall" was a case of trade name colliding with popular slang.

Hoover had really bad timing in terms of getting elected and got blamed for a lot of things that he couldn't have controlled, and there were a lot of nicknames involving "Hoover", including, but not limited to "Hooverville and "Hoover wagon."

Not that Hoover was associated in some way with ladies' informal wear, but since Hoover-this and Hoover-that was apparently on the public tongue, anyway, it wouldn't a surprise if that particular trade name stuck and became a more generalized term.

You will notice that the double-breasted wrap front persists; still very practical in case of spots and stains.

A different perspective: Hoover is a generic name for any brand of vacuum cleaner in the UK. Even though I'm a Canadian living in England, I remember my Mum 'hoovering' in a house dress similar to this. I have a childhood snapshot memory of her dimpled elbows, hoover plugs and Lego disappearing up the hoover.

Unsung Sewing Patterns has been featured as today's Quail Mate.

The whole subject of Hoover-ness is turning out to be very intriguing. Old Town clothing features a bungalow apron with what they refer to as a "hoover front" - the wrap front that seems to define the style.

I've always loved the use of hoover as a verb.

The 31st president of the U.S., Herbert Hoover (who, I just recently remembered, lived here in Oregon for a few years) and the vacuum cleaner are not related to one another, as far as I can tell.

To each their own Hoover!

LOVE your blog!
I found you through Quail by Mail and am delighted that I did. I'll drop by often.

Thank you! Do feel free to wander around. I update earlier posts as more information comes my way so it's worth stopping back now and again.

Just found your blog via a search for information on the "hoover apron." I especially appreciate the trace back to the earlier appearances of the apron. Any more leads on the origin of the name? I'm writing a series of period mysteries (1930s) and am always on the lookout for interesting bits of information.

Susan - I haven't (yet) tracked down the smoking gun - that is, the publication from Hoover's Food Adminstration in the 19-teens that recommends or defines the style of apron.

I really need to track down the article by Joan Sullivan. "In Pursuit of Legitimacy: Home Economists and the Hoover Apron in World War I." published in The Costume Society's journal Dress 26 (1999): 31-46.

This is such a great post! I've made a couple of my own Hoover style dresses - love them! So comfortable and great for doing housework in : )

I remember my mother wearing Hoover aprons on the 1940's. They were great maternity wear also.