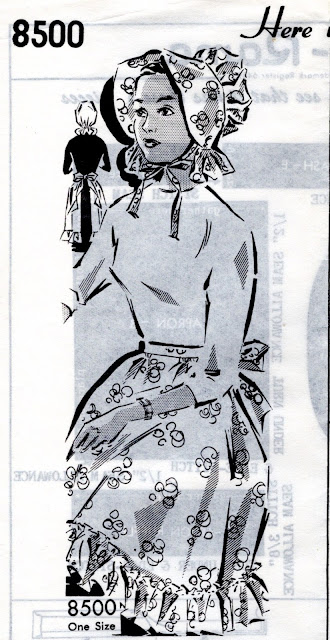 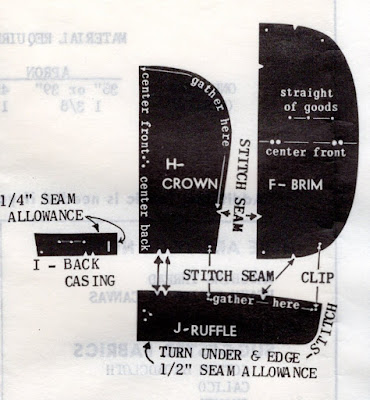 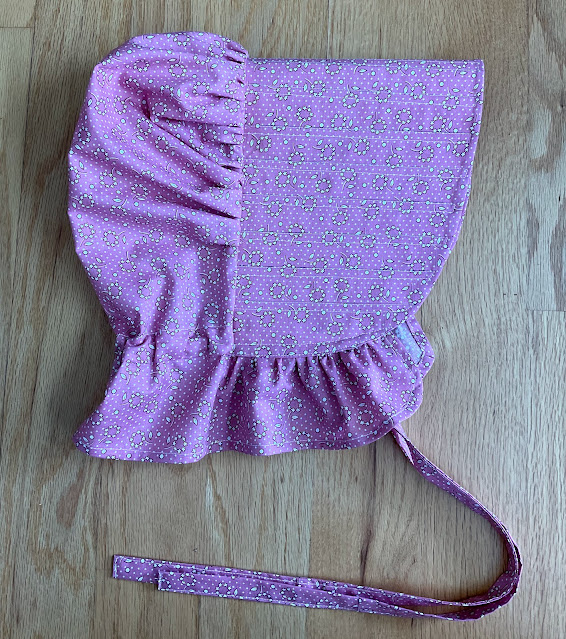 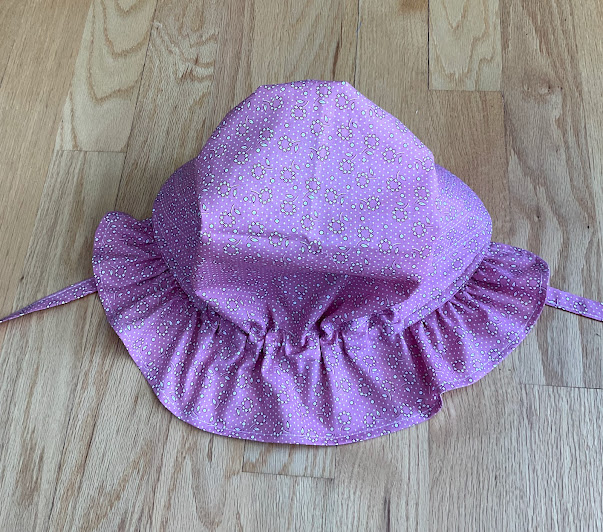 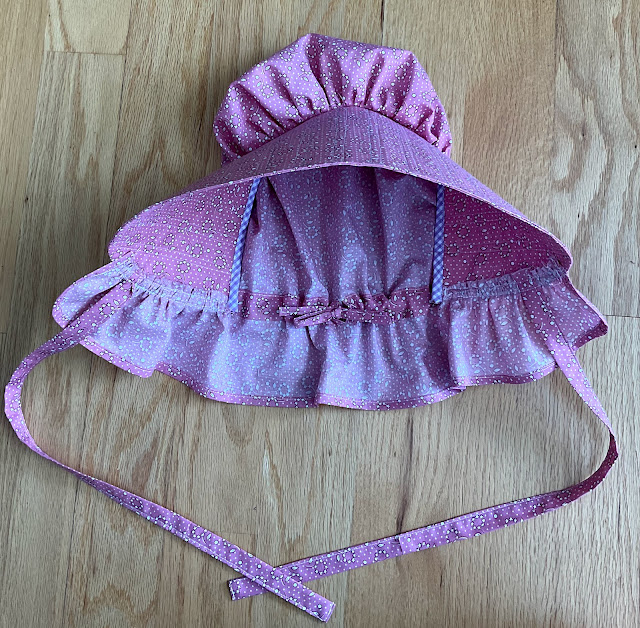 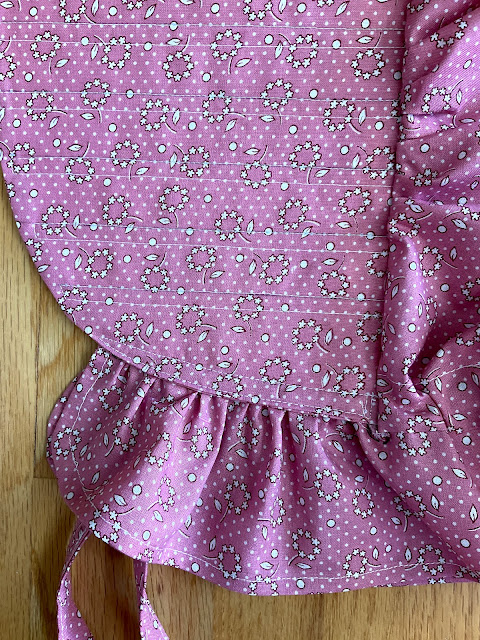 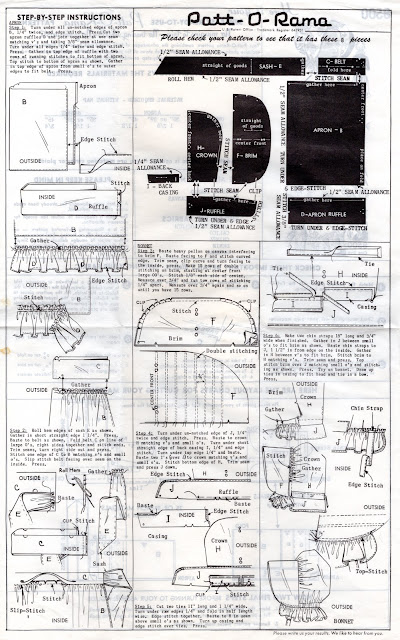 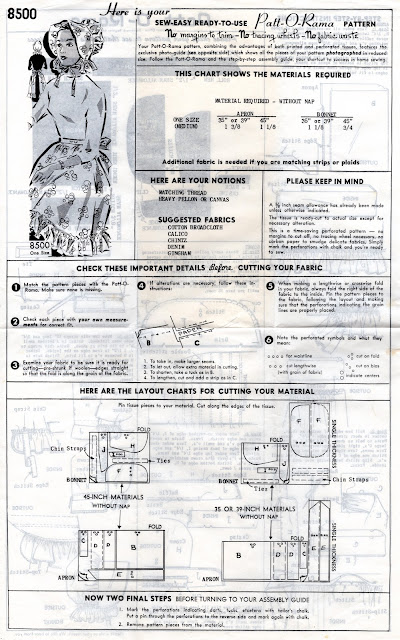 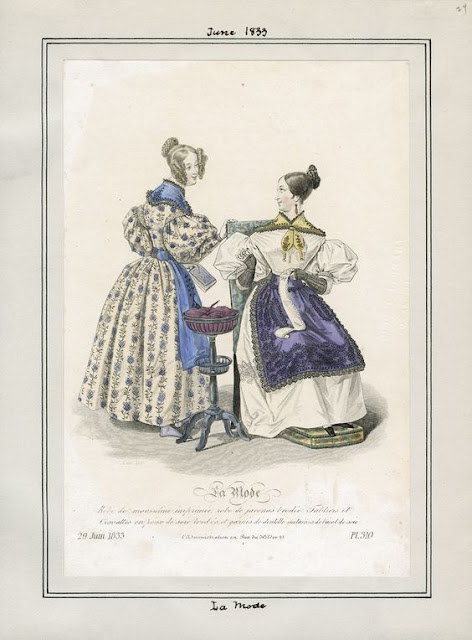 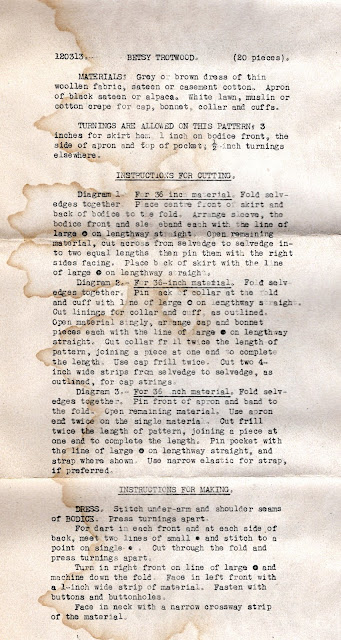 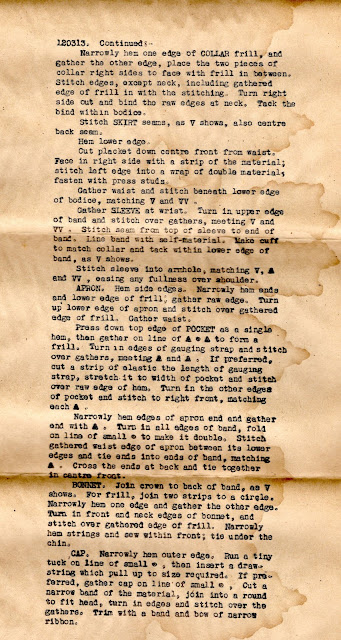 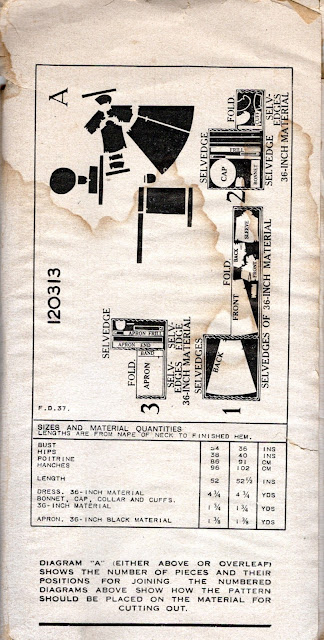 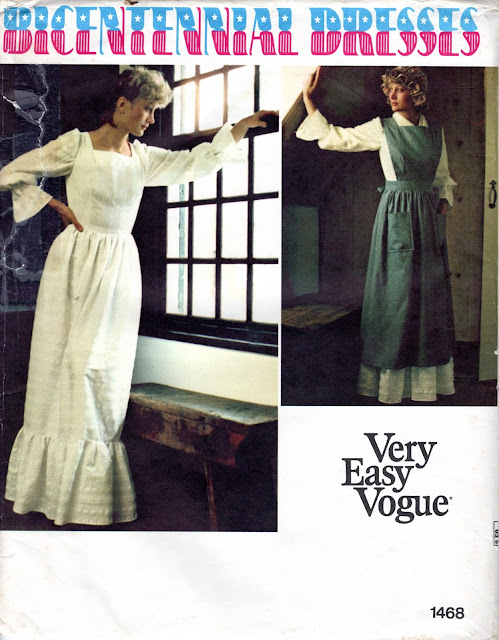 There is a little bit to unpack here, starting with how I did, then didn't, then finally did acquire my copy of this pattern.

I'd been watching for this pattern for several years before a copy finally came up for auction on eBay at a price I felt was reasonable.  I placed my bid and won.  And then I waited.  After about a week, the seller contacted me and apologized.  She'd gotten her wires crossed and sent my pattern to the winning bidder of a different pattern.  This person was so enchanted with this pattern that she hadn't bid on that she refused to return it.  So, the seller returned my money and I was back to watching, watching, watching.

The irony is that in my personal opinion this is by far the ugliest of the Bicentennial costume patterns out there.  Even the patterns sold in the newspapers tried a little harder than the Vogue design team responsible for this one.

Back in 1976, the pattern companies really didn't have historical patterns of the caliber of the best patterns that are available today.  They offered costume patterns with varying levels of historical accuracy.  Typically designed for use in local pageants, parades, or theater productions, the designers had to meet the needs of people with limited time and budget, and possibly only basic sewing skills.

In a sort of perfect storm of awfulness, 1976 was period when 100% cotton or linen fabrics were hard to find, with local fabric stores selling mostly polyester blends.  If you think this was deadly for the ladies' costumes, talk to gentlemen who marched in the stifling heat of July 4th parades in bright red 100% polyester broadcloth coats.  (A few years earlier, in 1961, some of these same gentlemen probably sweated through dark blue or grey polyester broadcloth as they commemorated the Civil War.  It's my belief that these experiences helped spur the research into greater historical accuracy that continues to this day.)

But in 1976, every town was going to celebrate the Bicentennial and by gum, we were going to dress the part, whatever vaguely historical part that was. 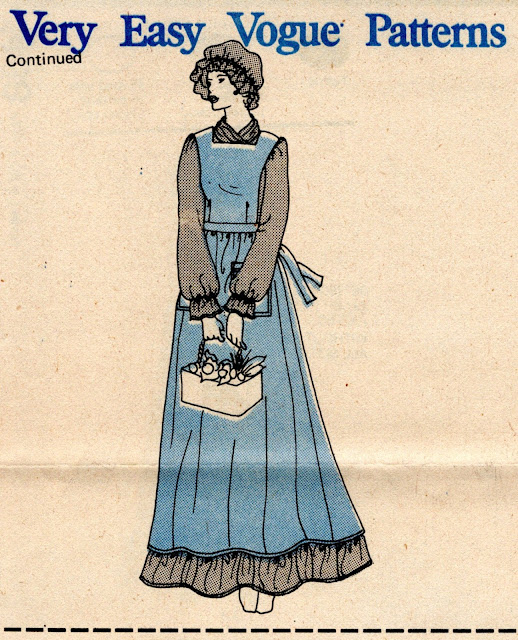 The Vogue design team seems to have checked boxes for "mob cap" and "fichu" and "square neck" and then gone out for a long lunch.   On the way back to the office they must have seen a Laura Ashley dress and decided that was that.  Even one of the interior illustrations evokes the Edwardian sensibility so central to Ashley's designs. 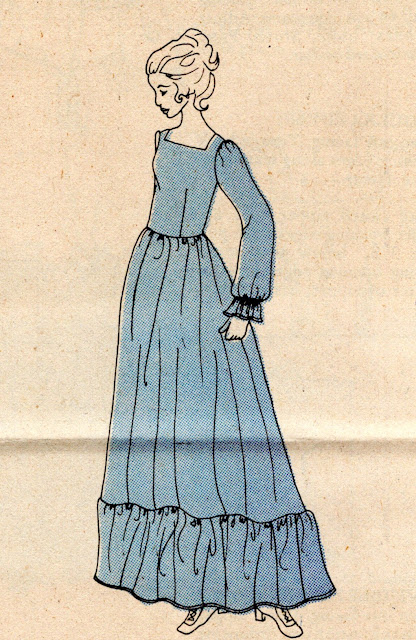 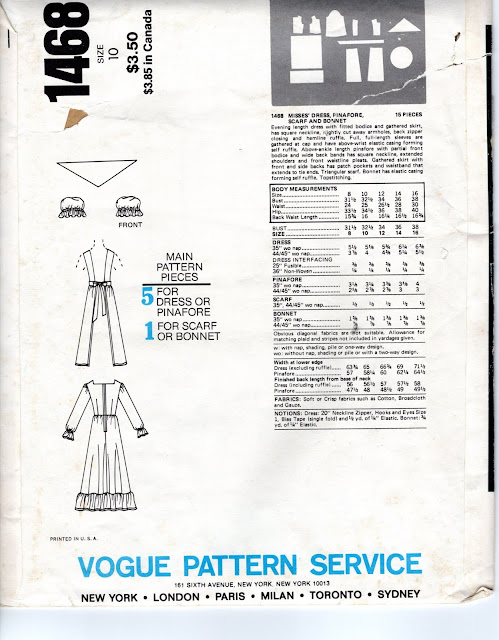 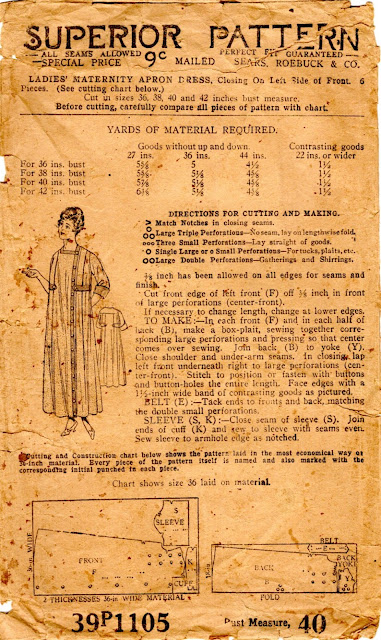 Nineteen-teens.  It's a little unusual at this early date to see a pattern described explicitly as maternity wear.  One suspects, though, that many patterns blandly described as wrappers, Mother Hubbards, smocks,  and bungalow aprons did service as maternity clothes.  Superior is the house brand of sewing patterns for Sears and Roebuck, and bless them for being very clear about the purpose of this garment, as well as offering it in larger sizes - up to 42" bust, in this case.

At about the same time, the Woman's Institute of Domestic Arts & Sciences cautions against making maternity wear that "serves to emphasize this condition because of the special, and perhaps unusual features it embodies."  The author goes on to recommend developing maternity wear "almost entirely from one kind of material, the contrast being provided merely by a collar..."  Lengthwise lines from shoulder to hem are recommended to help draw attention away from the widening mid section.

The Superior designer seems to have had much of this advice in mind.  This is a thoughtful, practical design that isn't too much different from other apron dresses of the period. The box pleats front and back add needed girth.  The elbow length sleeves are ideal for a working garment, and the square neck and contrast trim are an economical, stylish touch.

Although the envelope is rough, the unprinted pattern pieces are in very good condition. 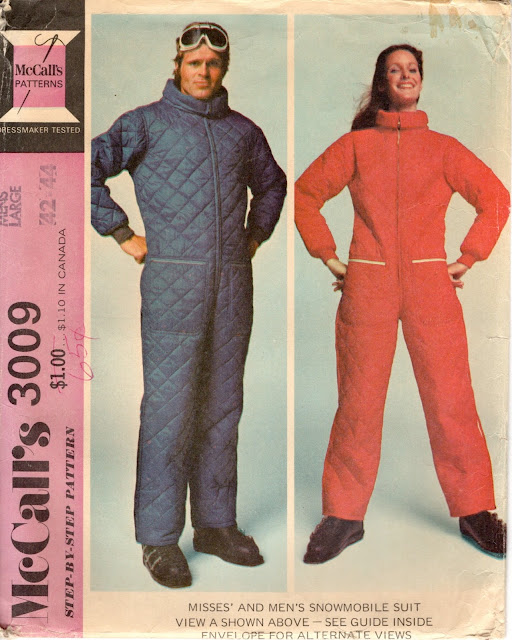 1971
It's getting to be that time of year.  A deep snow pack is developing and the ponds and lakes are beginning to develop good thick ice.  For the vintage snowmobile enthusiast, this may be the best way to complete your look.  If you get a crack on, you can get your entire family kitted out (in maybe matching!) vintage snowmobile suits.

Notice the groovy two-color version B, shown only on the back of the envelope. 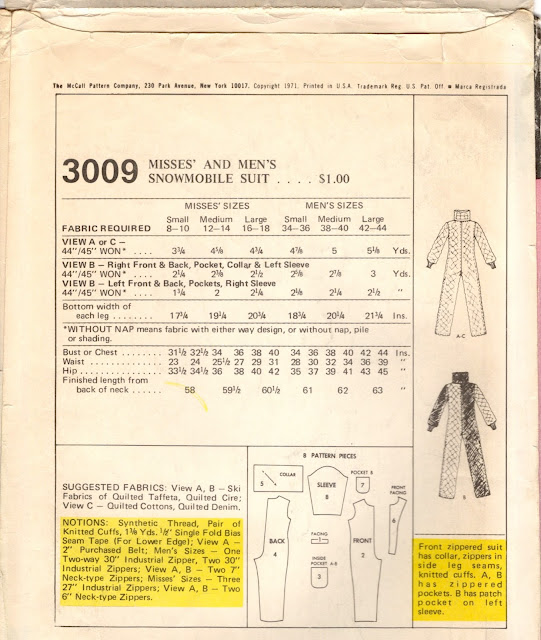 I had to look up one of the recommended fabrics - Cire, or more properly, Ciré,  is one of the family of fabrics with a hard, shiny surface finish.  Traditionally achieved with wax, heat, and pressure, by the time this pattern was printed ciré finish fabrics were beginning to be available in synthetic fibers.

Here's what snowmobiling looked like in 1971, when the price of Ski-doo's elan model would just about cover the cost of today's snowmobile suit. 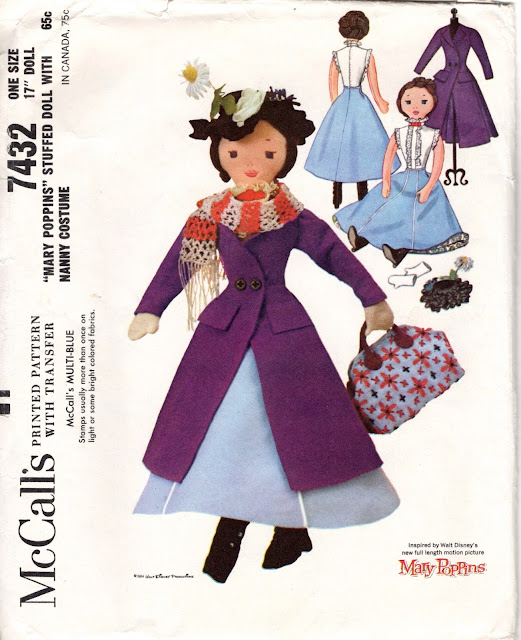 1964.  Although I concentrate my collecting on the more utilitarian patterns, I'm intrigued by patterns produced as marketing tie-ins, so a few have made their way into the archives.

This one resonates for me because I remember seeing the film during its original theatrical release.  In my cohort of seven year olds, we knew all the songs and staged our own versions of the story in our back yards and wished we had picture hats and frilly white umbrellas.  The "Nanny Costume" is iconic, but I've always wondered why there wasn't also a pattern for the garden party dress.

Making dolls and their wardrobes is fussy work.  Look at all the steps just to make the carpet bag. 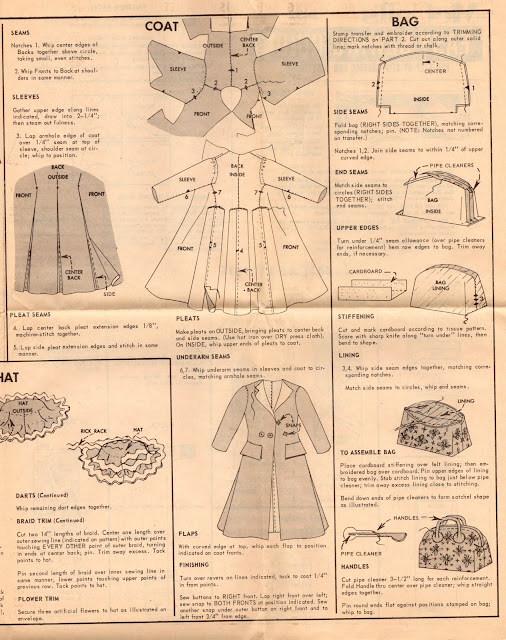 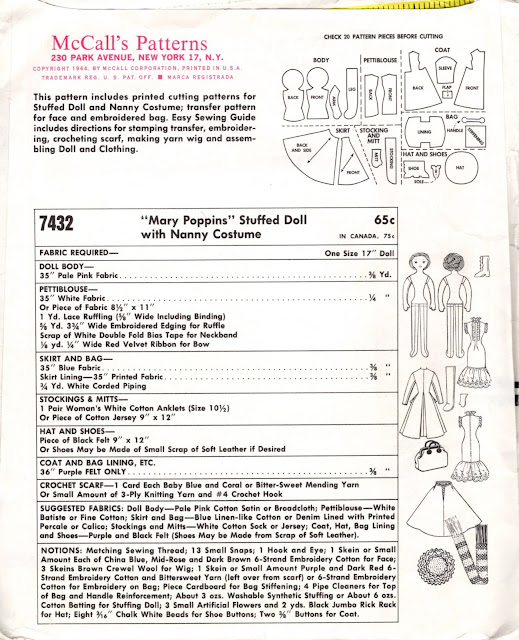 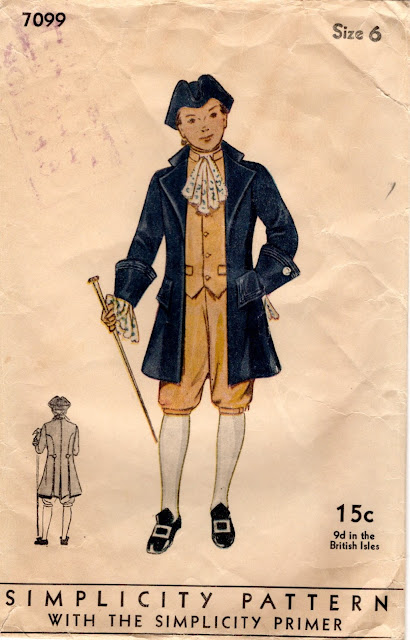 1938, based on the cinema listings in a cutout from a newspaper folded in with the pattern pieces (Snow White and the Seven Dwarves was playing at the Melba, children 20 cents all times.)

Independence Day is always a good time to get your Colonial on.  There is something sort of uproarious about providing the 9d price in the British Isles.  Perhaps if you squint really hard, the instruction sheet says "George III," not "George Washington"

Size 6 is for a little tyke, and won't he look splendid riding on the fire engine in the July 4th parade?  That is, if Mama managed to work her way through the tiny instruction sheet and the half inch seam allowances. 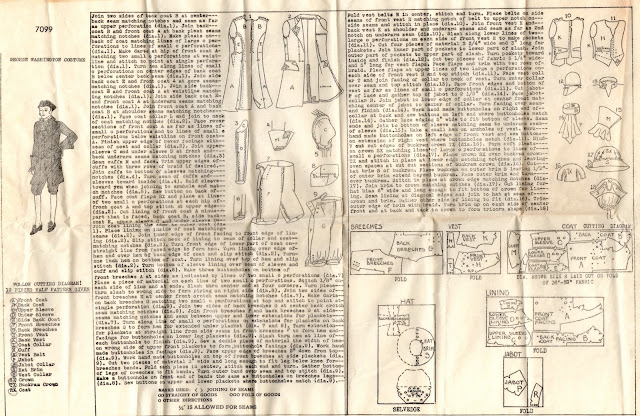 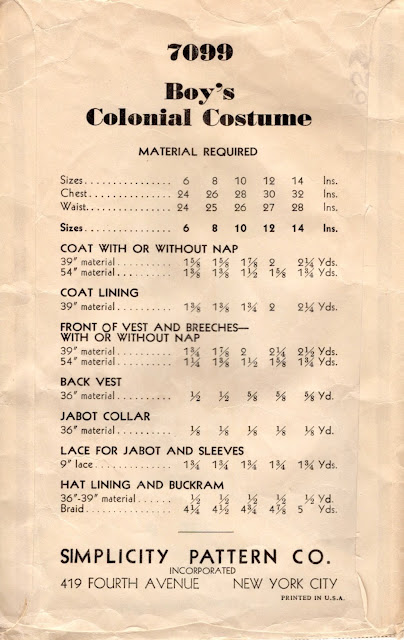 Have a safe and happy Independence Day, everybody!