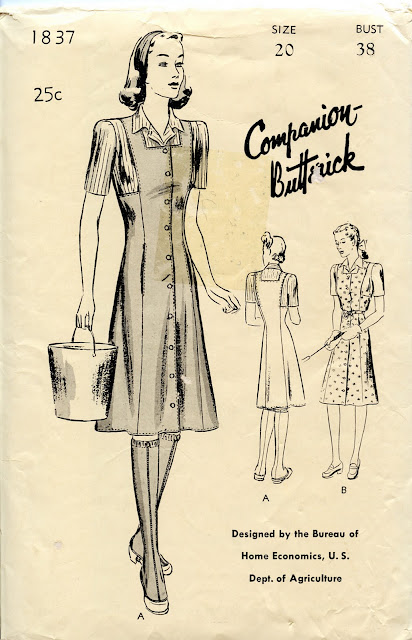 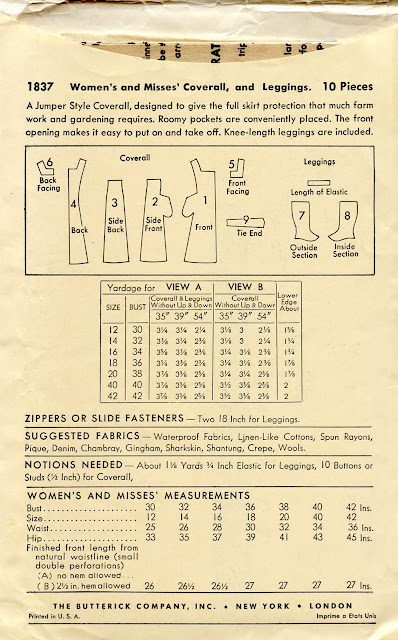 This was a very interesting post. I wonder how well those leggings stayed up while the women worked? I was also surprised that the pattern itself was in a larger size.
Thanks for sharing!

Wow, how fabulous! Thanks for the info on early workwear. Great post!

Mona I wondered that myself about the leggings. They have elastic around the top, so if you got your elastic just right, I imagine they'd be about like knee socks, which is to say, I'm sure they slipped after a while and you'd need to give them a yank. There is also a strap under the foot to keep them from twisting. The nice thing about the more utilitarian patterns is that they do tend to come in a wide size range.

I adore this apron! How practical and pretty! A lot of what we get today in the way of work garments are so ugly.

Another pattern I wished I owned myself... at first I thought the coverall had sleeves and a collar and was meant to appear as a jumper, but now I think it's a sleeveless garment and the sleeves/collar are just the wearer's regular duds underneath... am I right?
I actually think those "leggings" would be a really useful addition to my own wardrobe, since I wear dresses all the time.
Some night I just might sneak into your sewing room and make off with a few of these darling patterns of yours (of course I'd return them once I had them all copied off. I'm not a thief after all... just a very envious seamstress;-})