Ladies' Home Journal produced quite a few of these country-themed fancy dress patterns.  Here is their description of this pattern representing England:


"ENGLAND." Pastoral life in England may be charmingly depicted by the eighteenth century milkmaid, whose picturesque dress makes even the most democratic person regret the repealing of all sumptuary law which is responsible for the gradual elimination of the picturesque peasant garb of foreign countries and the adoption of less attractive and usually more tawdry modern dress.

Never let boring old historical fact get in the way of a good marketing strategy.  England is generally held up as one of the few countries which never developed distinctive "folk" or peasant costume, though there are a few garments with strong regional affiliations (farmers' smock frocks and fishermen's ganseys, for example.)

The linking of the repeal of sumptuary laws (which attempted but always failed to control what people wore, particularly in the matter of luxury and imported textiles) with the decline of peasant garb is a real head scratcher as well.

Fancy dress parties or balls were common during the first part of the twentieth century.   They were sometimes used as charity fund-raising events, perhaps on the theory that people might be more inclined to attend if they didn't have to deal with the pressure of being properly turned out in evening clothes.  With fancy dress, just about anything goes.  Recall also the fancy dress party that goes horribly wrong in Daphne DuMarier's Rebecca.

The milkmaid's occupational cousin, the shepherdess, was apparently a common sight at these fancy dress dances.  In a fashion column for February 15, 1914, The New York Times states:


The day has gone by when a group of shepherdesses, some short and plump, some tall and scrawny, some diminutively dainty and some possessing truly Minerva-like proportions, would be likely to meet on the floor at a fancy-dress dance.

The image of the milkmaid has carried a lot of iconography for hundreds of years, for those who are interested in that sort of thing.

Our milkmaid, whose occupation is confirmed by her pail and little milking stool, wears the stock "peasant" laced bodice and long skirt.  The panniers and cap declare her to be nominally eighteenth century. 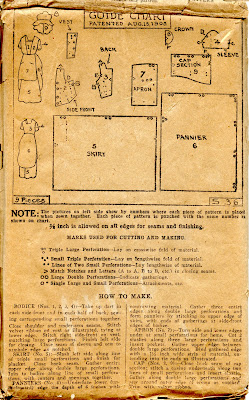 Actually, I have seen a lot of Postcard photos from the era that depict that shepherdess/peasant style (usually on smaller children and younger ladies, and very aesthetically presented) so I guess that there might have been an attraction to sew one up for yourself...
What an amazing find for you!