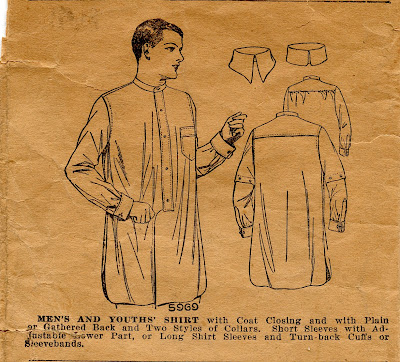 There are several interesting things about this shirt pattern. First, only the coat-closing version is offered, even though closed front (slip over) shirts are still common at this time. Second, two choices of detachable collar are given. I don't know how to "read" men's collars well enough to know if one is decidedly more formal (or casual) than the other. Third, detachable sleeves are an option. Miscellaneous Garments states that detachable sleeves are an option for outing shirts, "thus making the shirt an ideal garment for outdoor sports." It's also interesting to note that one may make the back gathered or plainly fitted to the yoke, the latter being considered more correct for dress shirts.

This pattern is unprinted. No instructions are offered except what's on the back of the envelope.